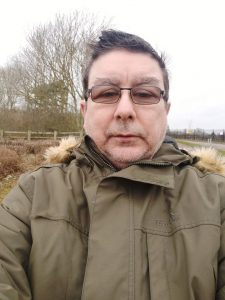 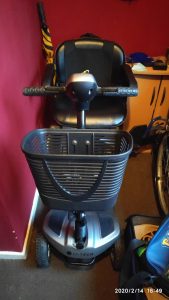 It’s been lovely today using my scooter for the first time. I felt so free and a lot less shattered.
I enjoyed all the fresh air, albeit cold and the interaction with people as I went around the streets like I used to have when walking. Obviously I am still physically capable of walking just not that far before I feel exhausted. Going around Sainsburys usually horrible for me as I starting being in a lot pain, nauseous and shattered very quickly. Today I went around (at a slow pace to avoid injury to anyone) and it was very pleasant indeed. I got some strange looks when I got up to get something but, that’s the point. NOT the strange looks, that isn’t the point but the feeling far more able to do a shop.

I did almost die on the way home when some very silly lady didn’t think a scooter had the right to use a zebra crossing. She ended up driving on the other side of the road calling me all the names under the sun and blaming me for being a blind dick and for being so stupid as to get in her way because she had a child with her. I did suggest that really, eyesight is a question but, not me seeing as I was the one stopped on a crossing whilst she was the one half driving across it on the wrong side of the road. I also suggested that perhaps she might let the child drive, they might make a better job of is. She was not a happy bunny when she drove off.

A random guy shouted as she left suggesting her actions were inappropriate. I don’t think he used those words precisely. All adds to the excitement though.

I have been reluctant to get a scooter for a long while. I viewed it as giving up. It doesn’t feel that way now though. Reality is, what is the point wearing myself out getting from A – B when I could actually enjoy the experience instead.
How lovely it was to see all the birds and hear nature around me too, not done that in such a long while. Did I mention it was cold?
I’m not using it all the while but for some trips, it’s perfect and as an extra bonus, it saves a fortune over using the car!