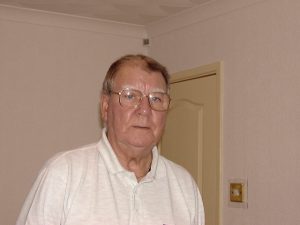 I was watching a TV programme earlier and it was one of those hospital things. On there was a guy in his 80’s, he has dementia and as soon as he started to get agitated suddenly all the emotions hit me of how Dad used to be exactly like that. How heartbreaking it was to watch Dad go from a healthy man enjoying life into someone I barely knew.

In this picture here it was not long before he and I had a conversation about whether or not he should have surgery. 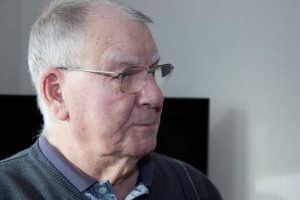 It was a major operation which would potentially improve his life loads and so I chose to ignore any alleged risks and advise him to have it done and enjoy the rest of his life.
I don’t know whether it was the worst bit of advice I had ever given but it has to be close. 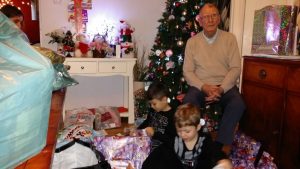 The conversation we had about it was one of those rare ones where Dad was talking to me like he valued my opinion. Usually with Dad I was left feeling like I’d been a huge disappointment to him and had nothing to say he could value so … I handled it badly I think

He had the surgery, I buggered off on holiday without a care in the world. What had happened would change the course of Dad’s life, my life and that of many of those around him.

It seemed as though the anesthetic had triggered a bad reaction. It was like he dived into full on dementia. 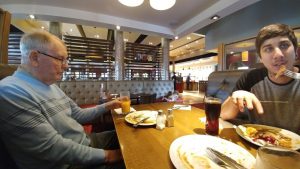 His entire being changed and there was no choice but to get him into a care home, something essentially left to my sister to fight over with Dad’s then wife.

After a few months Dad started to get back to how he used to be and we managed to sort out his divorce and get him moved into a flat in Essex. 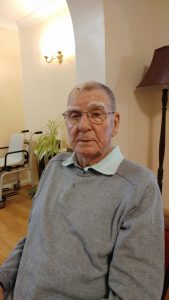 That idea lasted for a while but the dementia kicked back in again and he wasn’t able to stay there any longer and I got him moved into a lovely care home up this way.

Lovely as it was, he hated the place, of course he did. Part of Dads everyday personality throughout life was to take control and see the worst in everyone and then make a point of telling them so by making jokes at their expense and so on. That was him. It was not a shock then that he did this at the care home too.

With his dementia his arguments got confused. He didn’t know it was a care home, he thought it was either his home and all these scoungers just kept popping in to grab all the food or it was where he worked at the bank. He always mentioned that they were still not paying him so he thought he just as well retire. 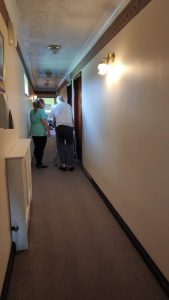 We had to put a stop on extended family and particularly his ex wife phoning in as it upset him loads, it made him very angry, upset and confused.

They may not realise that, they probably thought it was personal against them but it was just to make Dad’s life better.

The roles of the family changed over time. Initially he forgot who the grandchildren were though occasionally remembered Zoey because she visited now and then.

My sister became the manager there, Kath, his ex wife was the cleaner. I made the mistake of turning up in my carers uniform one day and he had no idea who I was and kept asking me to go do things so I quickly changed into something low key and he knew me again.

Right up until last year he still knew who I was and would occasionally introduce me to the other residents with pride. Thing with that was … Dad never had any pride in me, he didn’t really like me at all when he was ‘him’ but, even so it was nice to hear him say even if it was all muddled.

Every visit he would ask when I was going to buy him a better place for him to live in as this one was too big and he was sick of all the scroungers. He didn’t want much, a nice two bedroom bungalow would do, he was convinced he could manage on his own.

He was still hiding stuff. Nothing in his room worked because he either broke it or he disconnected it somehow. He’d managed to convince himself that if he rubbed his leg he could control the lights.

The last few years he was always lovely to me, sadly, slowly slipping away and being less like my Dad every week but on the whole, he was the best I’d ever known him and I got very close to him, more than I realised or acknowledged. 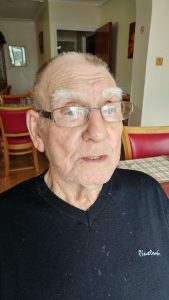 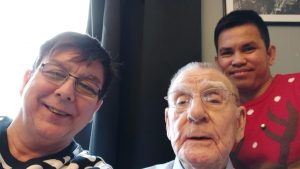 He got to meet Dennis. At first he understood we were married then, after a while Dennis became one of the workers at the home, the one that I liked he thought.

At Christmas time of 2018 we went there and brought him home to have the day with us. He was done up so smart and absolutely loved his time with us. It was a real pleasure to have him here. 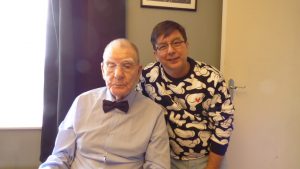 It was important to me to have him home as having worked in care for a while I got to recognise states of life and was quite sure Dad wouldn’t be around for Christmas 2019.

Throughout early 2019 it was obvious his health was declining, likewise his mood. He often said he was dying now, just a matter of time. 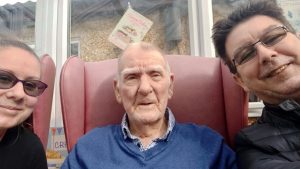 He still managed to have a laugh every now and then. He would often ask where my Mum was as he had not seen her for so long and missed her. Mum passed in 1986 but it was lovely to at least know his love for her was still there somewhere.

In the July I got a call to go be with him in hospital. His carers said that he was basically fine, was just a little under the weather. Upon arrival it was obvious that his condition was far more serious.

He managed to hold on another 3 days, we for a while thought he would drift away on the anniversary of mums death on July 10 but he held off until 13th. We’d been staying over night, me, Daisy and Matt but on the 12th they suggested we all went home as we were exhausted. We did but at around 4am I got the call that he had passed away. We were all very upset not to have been there but the reason for going home was valid.

Me and my sister took the decision not to inform anyone of his death. We had both had a negative experience of our mum passing, family splits/arguments and we didn’t want a repeat. To be honest, no one had asked about him for months, years in most cases. Obviously one person had told another and one family member did acknowledge his passing and that led us to believe that the news was known throughout the family. The total lack of contact thereafter really justified our decision to not involve them in any after death plans.

Dad was cremated. We have half his ashes here, Lynn has the other half with her and we have both dealt with that in a way best for us. We also held a memorial evening here for him where we had pie and mash and remembered him. He has here his own little square in our IKEA display cabinet with model buses, his glasses and pictures in it just next to a similar square for someone else very special to me.

Seeing that guy on TV this evening just made the emotions break out and I had a weep about it all having all those feelings of loss come back to me that I thought I had dealt with since the dementia kicked in.